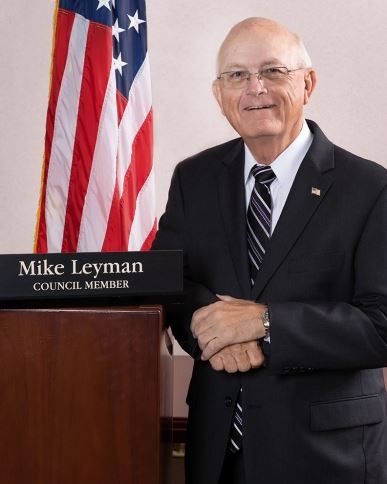 Ohio native Mike Leyman has been a resident of Mansfield since 1979 and began serving on the City Council in 2008 when he was elected to Place 2. He left the Council in 2011 to run for state office, and was later re-elected to the Council, Place 3, in May 2018.

Leyman, a former U.S. Marine, came to Texas in 1969 where he joined the Arlington Police Department where he was a patrol officer and later a detective. While at the department he graduated from Tarrant County Community College with an associate’s degree in law enforcement. In June 1979 he became the Chief of Police in Mansfield. While Mansfield chief he graduated from the FBI National Academy in Police Executive Management in Ouantico, Va. He left the Mansfield PD in 1986 to serve as the deputy chief of the criminal investigation division of the Richardson Police Department, and later as deputy chief of field operations. He retired from the Richardson Police Department in 2002.

In 2005, after moving back to Mansfield post retirement, Leyman became the chief of police for the Mansfield Independent School District, a position he held until 2013.