In the late 1970s, community leaders began working on a plan to develop what we know of as McKnight Park East into “Mansfield Central Park.” The concept would combine 25 acres to the east of 287 and 14 acres to the west (McKnight Park West) into one linear park that would connect both sides of the city with a lush, wooded green space along Walnut Creek. The original plan called for four general purpose fields for baseball, soccer and softball, four lit tennis courts, a day camp area, paved trails and natural trails and a pavilion with picnic tables.

At the time, the project was a revolutionary way to preserve green space and connect the growing city, and took years of work by volunteers, staff, community leaders and residents to assemble the various parcels of land and necessary funding required to make it all possible. Thanks to a $500,000 grant from Texas Parks and Wildlife and a $200,000 donation from James McKnight, the park (both McKnight East and West) officially opened on August 28, 1988, bringing state of the art softball fields, green space, playgrounds and wooded picnic areas, all connected by a trail that would become the first segment of our award-winning Walnut Creek Linear Trail.

In 1992, a Linear Park Committee was formed to begin the planning and development of a linear trail that would extend along Walnut Creek beyond the McKnight Parks, stretching across the city from west to east. Planning and land acquisition is a complicated process, and took decades of work by staff and community leaders.

In 2005, the city fully paved and widened the trail connecting the McKnight Parks and installed a historic railroad bridge over a Walnut Creek tributary near Palm Street, just east of McKnight Park West. The bridge had been purchased years earlier for preservation and was dedicated “Jeffryes Crossing” in honor of a longtime member of the park board, Steve Jeffreys. The bridge was an important step in the development of the linear trail, which crosses the water in a number of places.

Phase one of the linear park project opened in 2007 as the Walnut Creek Linear Trail, connecting McKnight Parks East and West to Hardy Allmon Soccer Complex, Rose Park and Town Park. Read more about the trail project and expansion here. 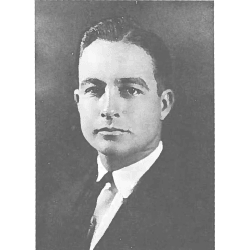 In its earliest use as a park, McKnight Park East was referred to as City Park. As the expansion plans progressed, city leaders began using the working name “Mansfield Central Park,” signifying the central location and unifying possibility of the space. In 1986, longtime resident James McKnight died, leaving the city $200,000 and a significant tract of land to complete the project. In recognition of his generosity, the entire park was officially dedicated in McKnight’s name upon opening in 1988 adding the East and West designations in later years for wayfinding clarification.

James Stephens McKnight was a farmer, real estate broker, painter and insurance agent whose life was dedicated to supporting his hometown in a variety of ways, from financial donations to acts of service. J. S. McKnight was born in Mansfield in 1901, the fifth child of Dr. William Burney McKnight, one of the city’s earliest residents and first doctors. James McKnight was active in a number of civic organizations, and in addition to the park land and funds, he left the city multiple gifts in his will, including the McKnight Building downtown to be used as a city historic museum.