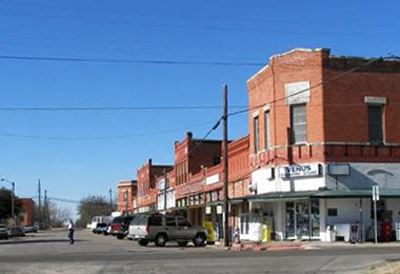 In 1894, Jabe Smyth (Smith), a well-known businessman in Johnson County, saw the need for a more convenient trade and marketing center for the eastern section of the county. Consequently, a town was surveyed and platted on land that he owned. According to the Handbook of Texas, the town was named after Venus Housby, daughter of a local physician.

Some of Venus, including the local post office had originally been located in a town call Wyatt Switch. Wyatt Switch had been established in 1881 when the Santa Fe Railroad came through. Santa Fe put a switch at the present location of Venus and what was left of Wyatt Switch moved to Venus. The Santa Fe depot opened in 1895. The depot on either side of the tracks included freight depots, express and telegraph offices making Venus very progressive.

Venus is in the midst of a once great cotton producing section. At one time, there was a cotton compress and three gins. The town was laid out around a square with a two-story Justice and jail at the center. Before 1900, and for quite a while after, Venus claimed to be the largest town in the county. At its peak, it had two banks, two hardware stores, two dry-goods stores, two newspapers, two telephone systems, two barbershops, a post office, lumberyard, livery stable, blacksmith shops, and a first-class hotel.

Burnette College was in existence from 1896 until 1906. Students from all over the area were enrolled. It took children from first grade through the college years. The school began with two frame buildings and two dormitories. At its peak, there were 525 day students and 75 boarding students. The structure burned in 1905 and was rebuilt. In 1910 to 1911, the college was abandoned and became a public school. In 1941, a new modern school was built.