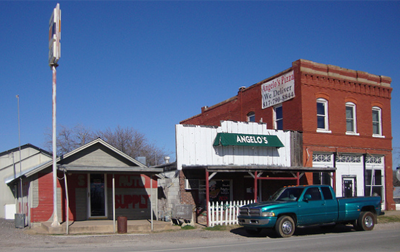 In 1902, the International and Great Northern Railroad Company began placing a track in part of the land where Lillian was later to be built.

About the same year, a man driving a two-horse buggy came to the community and spent the night with G.J. Renfro. While there, the man, J.W. Cunningham, bought some property from Mr. Renfro on which he was to place a townsite. Both Mrs. Renfro's and Mrs. Cunningham's first names were Lillian, and after some discussion, the two men decided to name the "town-to-be" after their wives.

By 1903, businesses were coming to Lillian. A drug store, blacksmith shop, grocery store, hotel and bank were all located in Lillian by 1905. Two churches were relocated from Pleasant Point to Lillian in 1903. The Woodsmen of the World Lodge was built adding a second story to the bank in 1905.

In later years, two lumberyards, a garage and filling station and a dry-goods store were built, as well as a hardware store, livery stable, and barber shops. H.C. Green built the first telephone building and Mr. Manning established it as a business. The last owner of the telephone exchange was Three-States Telephone Company which abandoned the system in 1933.

Lillian has had two gins in its history. The first was owned by the Lillian Gin Company, and burned in 1934. The second, built by Winfield Scott, also was destroyed by fire.

The first school was in a single frame building, completed in 1903. On November 7, 1904, the first school of Lillian, known as the Lillian Institute opened. Fifty-five pupils were present for this first day. Their ages ranged from six to 24 years of age. In 1906, the Lillian Independent School District was formed. In 1909, a new, two-story, brick building was erected. About this time, the Shaw School was consolidated with Lillian. West Point Valley joined the school district in 1917 and Pleasant Point followed, joining in 1931.

At one time, there were about twenty businesses, a depot, churches and forty-five homes in Lillian. The public well that stood in the center of Main Street was filled in during March 1935, and the street was graveled; the first road improvement in that part of the county.

Lillian is located south of Mansfield and is still a growing, thriving community.