Tarrant County, boasting a population of 6,020 in 1860, was a thriving link of settlements consisting of commercial endeavors, schools, churches and even a partially completed courthouse at the county seat of Fort Worth.

While sympathies and southern ties ran high, secession was debated back and forth. Many were of sons of the South, yet most were not slave owners. The 1850 Census lists only 65 slaves in Tarrant County. Secession finally won out but the issue of self-determination was the leading cause for area residents, not slavery. One Mansfield resident was quoted as not being for slavery so much as opposing "the disinterested self-righteousness of the Yankee." 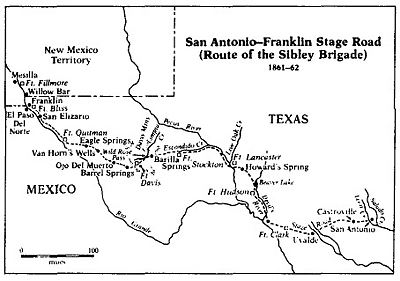 A group of men was organized from Mansfield, Fort Worth and surrounding areas by Thomas O. Moody, a farmer and merchandiser. The men were enrolled into Company K, 7th Regiment, Texas Mounted Volunteers, Sibley's Brigade, Confederate States of America (CSA) on October 26, 1861. There were 117 men and about 12 were from Mansfield. The unit mustered into confederate service at Camp Pickett, near San Antonio on November 15, 1861. This unit was part of the Western campaign for the New Mexico and Arizona Territory. They fought in the Battle of Galveston and participated in a 2,400 mile, eight-month march where nearly 600 men out of 2,500 died from wounds or sickness and three-fourths of them arrived back in San Antonio on foot.

Approximately 123 veterans from Mansfield served in the war. Some, such as Martin Ballweg, only settled here after the war. About 13 served the USA, the rest served the CSA, with at least one who served on both sides at one time during the war. These other men, who did not join Company K, joined various other groups. Others from the area had joined up at Johnson's Station, known as Terry's Trading Post before the arrival of Middleton Tate Johnson, or in Ellis County with Colonel Parsons.

Shortly after the onset of the war there were only 2 men left in Mansfield. Dr. Duff Hodges, being the only doctor between Mountain Creek and Village Creek, was exempt, as well as Ralph Man who stayed behind to run the Mansfield Mill as a Confederate tithe mill to supply the troops. Julian Feild joined the conflict and was assigned as Assistant Quartermaster stationed in Dallas.

War casualties from this area are not confirmed but Mansfield paid a high price. Many families were touched by the war as evidenced by the number who served.

After the war life in Mansfield slowly returned to the hum of a farming community. Soldiers returned to find that the community had suffered hardships, but still persevered. The community began to grow once again with new arrivals- some from the South and some from the North. The mill continued to be a thriving hub of enterprise.

Detailed list of the veterans as well as some pictures are available in the museum.